2014
Being raised in a Catholic household, witnessing my mother’s unwavering belief in and devotion to this religion. When I was a child I did not question going to Mass or the Church’s teachings, but as I got older, those teachings began to conflict with what I was witnessing in the world. Also, I often felt disconnected from the religious imagery I was exposed to, because I was taught that the images were actual representations of what had happened according to the scriptures. Instead, that imagery came from the imagination of an artist and his view of the world, or from his interpretation of the scriptures of the Bible, which did not relate to my views or offer substantial proof.
I have a body of work titled “Doubting Thomas: The Testaments,” that explore my experiences and understanding of the biblical stories that my mother and I often discussed. Using photography in this project to establish a tangible connection to my corporeal existence. My problem with paintings and drawings is that they are not realistic, by which I mean they do not represent something I have personally witnessed, touched, or captured, which a camera has the ability to document. Yes, a photograph “can lie” with the use of darkroom and Photoshop techniques, but photography still has the power to make the viewer question reality in a way that no other visual mediums can, except for video.
For the past several years I have two criteria for taking photographs that invoke my spiritual side and seem to reflect a biblical scripture, namely that: (1.) I must shoot instinctively, and (2.) I must only use found scenery. The reason for this is because I am approaching my subject matter as a documentarian, capturing God’s hand at work.
I have learned that my artwork is working like the religious imagery that I had a hard time connecting with in the beginning, in such way that the photographs demonstrate my understanding of the scriptures, my faith, my culture, my time period, and my wanting to share a spiritual experience.
This self-exploration shows my struggles with my faith, whether I make light of it or at the same time hold it in high regards. I believe in a higher power, but to say that it is definitely God, Allah, or Buddha, I cannot decide. I struggle with the need to give it a face or a body, something that I can identify, something tangible and thus similar to the doubt that Thomas had. 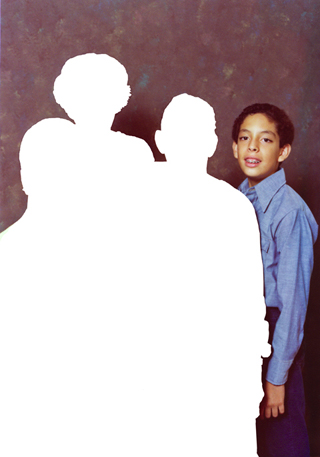